Press conference held on International Day of Action for Rivers.

On the eve of International Day of Action for Rivers, a press conference was held at Dhaka Reporters Unity (DRU) on March 14, 2019 jointly organized by Bangladesh Poribesh Andolon (BAPA) and Waterkeepers Bangladesh on “Citizen-centric obse 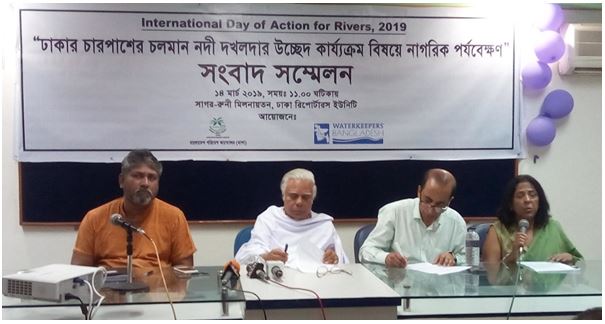 Sharif Jamil showed a power point presentation where he presented the ongoing activities of demolishing illegal structures from river area, some encroachments in the rivers and reports from different times about river grabbing including some recommendations.

Eminent writer-researcher, intellectual Syed Abul Maksud welcomed the ongoing eviction drive in protecting the river. However, he said, those who occupy the river think it as their property. Due to not being punished, the possession of the river does not stop. He encouraged the ongoing illegal eviction program and said this program should be ongoing. But he emphasized on proper demarcation of river area as the first task to do in this eviction process.

Among the 8 specific demands in the conference, both the organizations demanded the existing walkways to be declared as illegal structures demolish them and put up at the edge of 150 feet distance from the foreshore line keeping the deltaic character of Bangladesh Rivers.