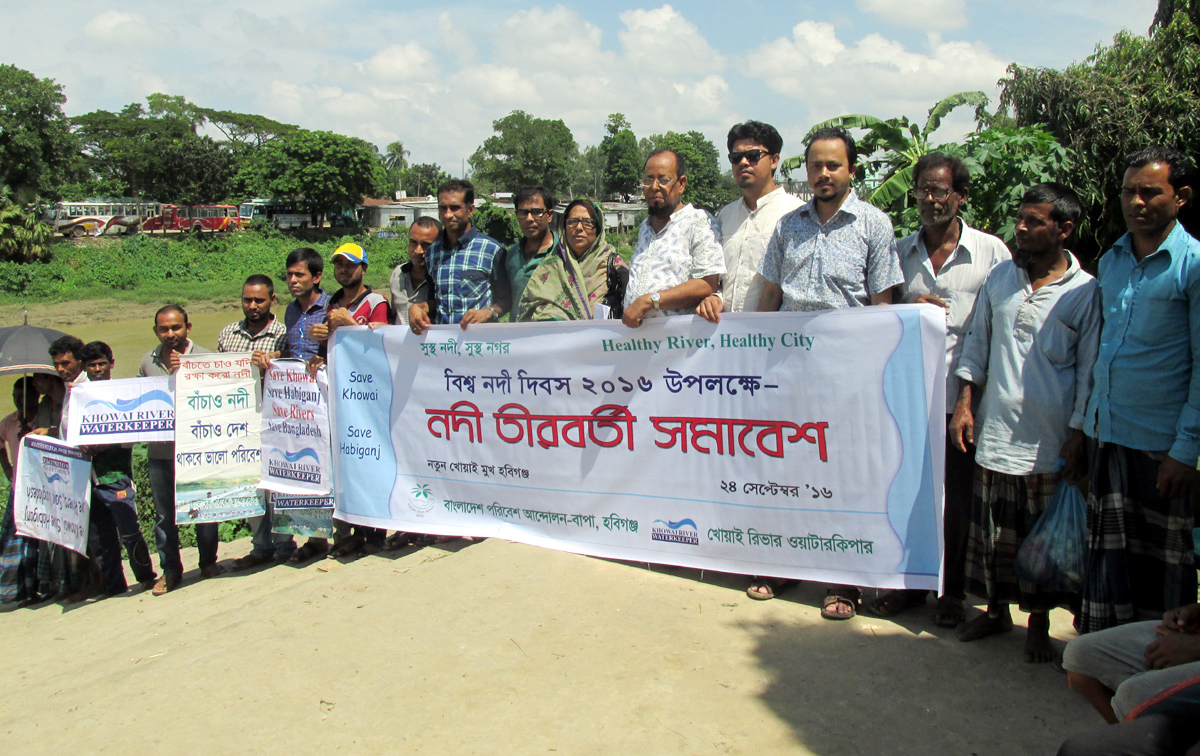 Our rivers are being endangered day by day. Different kinds of oppressions are strangulating Khowai, Sutang and old Khowai River. The speakers spoke on the rally called “Rally by the bank of the River” arranged jointly by Khowai River Waterkeeper and Bangladesh Paribesh Andolon (BAPA) at 11.00 am on 25 September 2016, Sunday, on the eve of World River Day 2016. The theme of the rally was “Healthy River, Healthy City”.

In his speech, Khowai River Waterkeeper said that there was a boat terminal on the western side of the Cattle market in Habiganj city. Thousands of people and goods were transported to Adampur, Astagram, Madna, Ikram, Sujatpur, Bazuka, Chanpur, Kashipur, Bulla and other areas through this terminal for years. The terminal had been closed since last two years as the River course changed in that part of the terminal. Khowai River has moved far away from that market due to unplanned sand extraction and land grabbing. Moreover, waste dumping from the adjacent households and discharge of effluent by the industries has made the River a dustbin. We are very apprehensive about it.

Illegal sand extraction and land grabbing are being conducted on one hand and on the other hand, various industries are dumping their waste in Sutang River. The present figure of old Khowai River is horrifying. The existence of Khowai River is in danger due to illegal encroachment. Though the existence of Khowai River barely survived from Sadar Hospital to South Shyamoli, the River has shrunken due to river encroachment. Some people and organizations by the riverbank have possessed the river by filling up the riverbank. Moreover, dumping from the household finds their final way to old Khowai River. So, immediate movement should be raised against the people and industries who are responsible for these malfeasances.

Meanwhile, the environment has been polluted for last some years due to the dumping of different industries situated in Madhabpur and sadar upzilla. Along with Sutang River, the adjacent water bodies are being polluted due to industrial waste. Industrial wastes have made Sutang River fishless and created serious health hazard to the people who use river water. Cattle are dying, humans are being infected with various skin diseases and crop production is decreasing. That’s why to protect the environment from pollution and encroachment, steps should be taken against the responsible people and organizations, and only then it would be possible to revive the healthy and natural environment of the River as well as the adjacent water bodies.