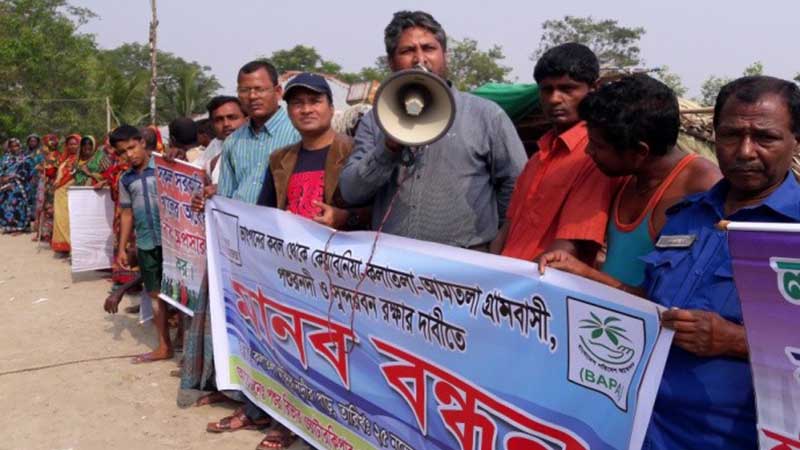 The Pashur River flows through the southwestern part of Bangladesh, is the lifeline of the Sundarbans, the largest single-track mangrove forest in the world. It meets the Shibsa River within the Sundarbans, and near to the sea the river becomes the Kunga River. It is the deepest river in Bangladesh. Ironically, the life of the people living near Mongla port is now endangered due to river erosion due to increased traffic and continuous dredging to facilitate reckless industrialization around Mongla. The port is situated at the confluence of the Pashur River and the Mongla River. 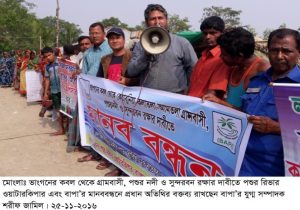 Waterkeepers Bangladesh has been on site working with communities to demand immediate measures to protect the Pashur River and the largest mangrove forest Sundarbans. To come forward and to monitor the situation, on 25 September 2016, a unique protest rally was arranged by Pashur River Waterkeeper and Bangladesh Poribesh Andolon (BAPA) to protect the ‘Pashur River’ and the word heritage Sundarbans. People from Keyabunia, Kolatola and Amtala villages in Mongla supported and joined the rally. Md. Noor Alam Seikh, Pashur River Waterkeeper presided over the meeting while Sharif Jamil, Buriganga Riverkeeper, Coordinator of Waterkeepers Bangladesh and Joint Secretary of Bangladesh Poribesh Andolon (BAPA) was present as the Chief Guest. Abdul Karim Kim, Surma River Waterkeeper and Abdul Halim Hawlader, UP Member (Chairman in charge) of Chila Union Parisad; Freedom fighter MD Unusur Ramhman and Ranjit Pramanya, the President of Chila Union Fisherman Co-operative Society spoke on the occasion.

The speakers exclaimed, ‘dredging is often not the best long-term or economic solution and increased dredging of rivers on the Somerset Levels would not have prevented the recent widespread flooding’. In fact, the river channel is not large enough to contain extreme floods, even after dredging. Dredging of river channels does not prevent flooding during extreme river flows. The concept of dredging to prevent extreme flooding is equivalent to trying to squeeze the volume of water held by a floodplain within the volume of water held in the river channel. 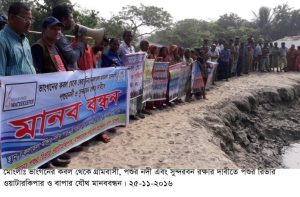 “Industrialization around Mongla started far back since the Mongla Port was a reason to encourage commercial activities. But those were not much large scale and the Pashur River and riverbank villages were not that affected. Recently after inception of large coal based power plants in Rampal area by the bank of Pashur, reckless industrializations are being taken place very fast that increased navigational traffic on the river Pashur to carry construction materials and raw materials”. Sharif Jamil, Buriganga Riverkeeper, council member of Waterkeeper Alliance and joint secretary of BAPA, said. “This riverbank erosion again proves the carelessness of the government towards the protection of the Sundarbans and justifies the call to stop construction of Rampal and Orion Power Plants.

Accordingly to a report, when Mongla port was established in 1950 the depth of the confluence of the rivers Pashur and Mongla was 35 feet. During the last 63 years from 1950 to 2013 the depth was reduced to such a stage that at present a ship of 9 feet draft cannot enter the channel. The government took up a project to dredge the Pashur river so that coal-laden vessels from can travel through it to Rampal Power Plant to be set up only 14 kilometers away from the Sundarbans. Capital dredging of the Pashur channel from Mongla port to the proposed power plant in Rampal, Bagerhat is estimated to cost Tk166.50 crore. At present the depth of the channel allows up to 6.5-metre permissible draught vessel to use the port. The channel began to silt up with the flowing water of the Pashur and Baleswar rivers during tide. The channel lost its navigability as businessmen began illegal shrimp cultivation by closing different link canals and constructing various polders. A large number of landless families, who depended on the land and water bodies for their livelihoods, have been displaced without any compensation. Additionally, the river belt from the Mongla port to Rampal is undergoing rapid industrialization, with land being acquired both legally and illegally. Displaced people have lost their traditional livelihoods and thereby face hardships of life. As a result, the river is now at a great risk due to continuous erosion in the bank.  Skimming down the Pashur waterway on a vessel from Mongla towards Khulna, a visitor will come across hundreds of barges and launches anchored along the river banks. Thick steel pipes settled to powerful pumps in these vessels eruct silt and sand from the riverbed to fill up the uneven plains and water bodies of the farmland on both banks. As far as the eyes can see by the riverside, hundreds of signboards dot the area marking claims to separated plots the new proprietors will assemble modern buildings and utilize the Pashur waterway to bring crude materials and send out finished product. Right in the middle of these brand-new “industrial plots” stands the massive project area of the Rampal 1320 megawatt coal-fired power plant project. Three ships, one carrying coal, sank in the Shela river in Chandpai range of the Sundarbans under Mongla upazila of Bagerhat in the last one and a half years. Environmentalists say it is a signal that the operation of a power plant so close to the forest would inflict damage on it.

The dredging project has been taken to ensure that the Sundarbans is not damaged, Planning Minister AHM Mustafa Kamal told reporters after the Ecnec meeting. But dredging without proper impact assessment may expose way more disaster for the river Pashur and the Sundarbans. 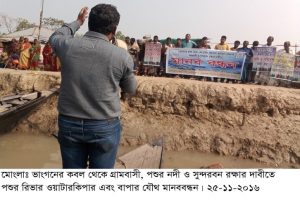 Land acquisition and building of the road networks have already begun amid a movement by environmentalists against the initiative. Approximately, 400 acres of land, including a natural canal, has been filled by about 20 feet. This will in turn deteriorate the ecosystem health of the Pashur and Maidara rivers. The movement highlights that the power plant, by the bank of the Pashur River and surrounded by the Maidara River, is only 8 km away from the Dhangmari dolphin sanctuary.

Local people have been constantly harassed by powerful quarters through threats, intimidation, assaults and filing of false cases if they were trying to protect their land. The Mongla port gets the chance to see a maximum of 100 ships a day. Industrialization of this area, triggered by the presence of the Rampal plant would gradually increase the number of ships. The bank erosion will be increased significantly when those industries will come into operation. The people and villages by the bank of Pashur need to be protected immediately.

Waterkeepers Bangladesh and Pashur River Waterkeeper will be working together with the people by its banks to protect the river and themselves.