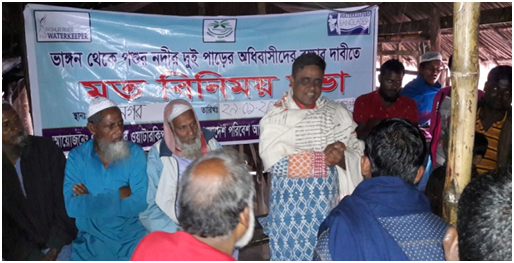 A street meeting was jointly arranged by Pashur River Waterkeeper, BAPA and Waterkeepers Bangladesh respectively on 29th January 2017 evening, at Kanaigor, Mongla. The discussion and signature campaign was held with the locals on protection from Pashur River erosion, unauthorized dredging, unplanned industrialization and sand extraction.

The meeting started in the afternoon, chaired by Kari Abdul Khalek. The Chief Guest of this meeting was 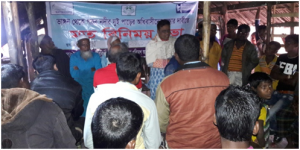 Pashur River Waterkeeper Md. Noor Alam  Sheikh. In addition, BAPA member of Mongla Tanjim Hossain Mukul spoke for the cause. Among others, Nasir Howladara, Abdus Sattar Khan, Sobhan Gazi, Abdul Rashid gave their valuable speech at the event. Md. Noor Alam Shekh, Pashur River Waterkeeper mentioned in his speech, ‘reckless encroachment, illegal grabbing, unregulated fishing, and sedimentation are also gradually killing Pashur River. It is imposing threat to the Sundarbans as well’. He also said that the poor villagers have become helpless and homeless from the erosion of river Pashur.

Despite making the Rampal mega project a successful one, the government failed to make any development for the locality living along the riverside. Fisherman Abdul Rashid mentioned that because of water contamination there is insufficient fishes to get. Pashur river is being polluted due to ships sinking with oil, fertilizer and coal. The chairman of the meeting Kari Abdul Khalek mentioned that the mosque at kanaigor would soon collapse and the remaining part would drain into the river.  In the meeting, it was declared that on 12th February a grand event would be held at Chila Bazar, and the present locals were encouraged to attend it. More than 100 villagers of Kanainogor were present during the meeting.

Another meeting was jointly arranged by Pashur River Waterkeeper, BAPA and Waterkeepers Bangladesh on 30th January 2017 morning, at Beribadh of Charkana  ward no. 9, Mongla Port. Discussion was held on Pashur River erosion, pollution and protection of the indigenous group.

The meeting was chaired by local citizen Md. Babul Shardar, Chief guest was Pashur River Waterkeeper Md. Noor Alam  Sheikh. In addition Abdul Karim, Shopon Hawladar and Khaironessa spoke for the cause. The speakers requested the government to take necessary steps in order to save the Pashur river from erosion. The speakers mentioned that the unauthorized industrialization is to be blamed for the current scenario.