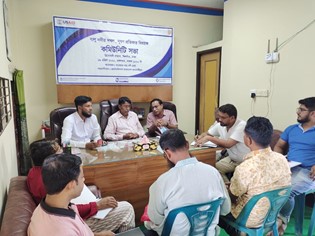 Waterkeepers Bangladesh (WKB) consortium organized seventh community meeting on 19th April with the convening committee of the Barogram-Balu River Coalition. The meeting was organized jointly by the Barogram-Balu River Coalition and Waterkeepers Bangladesh Consortium under the project titled “Promoting democratic governance and collective advocacy for environmental protection in Dhaka city” under Promoting Advocacy and Rights (PAR) Activity which is being implemented in collaborations with the USAID and Counterpart International. It was a two hours long event organized at Trimohini Bazar, Khilgaon, Dhaka.

A total of 40 persons attended in the community meeting (all men). Later in the evening ifter and dua (prayer) mahfil was organized where about 50 community people were attended.

The community meeting was presided over by Mr. Md. Suruj Mia, Convenor, Barogram-Balu River Coalition. Md. Kamruzzaman, Project Coordinator conveyed greetings on behalf of the WKB Consortium and thanked the community leaders for organizing the meeting. The meeting was addressed by Mr. Mojahidul Islam Emon, Mr. Amzad Hossain, Mr. Md. Saiful Islam, Mr. Md. Maij Mia, Mr. Md. Ariful Islam and many others. This was the first meeting of the convening committee of the Barogram-Balu River Coalition after its inception on 2nd March 2022. As part of the extended meeting of the coalition an Iftar Mahfil and dua (prayer) event was organized in the evening on 19 April 2022. Special dua for success of the proposed Balu River Festival.

The meeting decided to organize Balu River Festival during the month of September 2022. Participants discussed the ways to include mass people from the riverbank communities. Coalition leaders decided to form unit committees in all the villages and organize courtyard meetings for mass participation in the proposed Balu River Festival. Coalition members expressed their willingness to involve all stakeholders including politicians and industrialists in the proposed Balu River Festival. The meeting also decided to organize human chain, develop and distribute leaflet/handbills on the consequences of river pollution before the festival to attract attention and create awareness against river pollution.