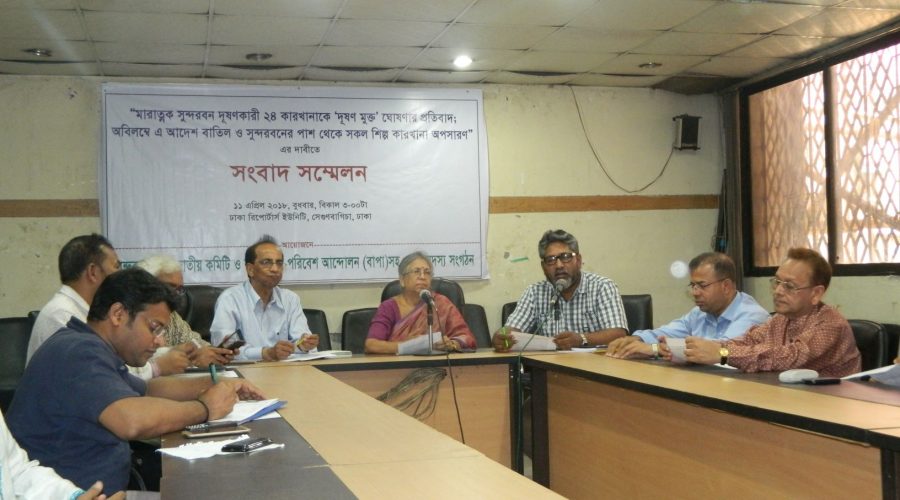 Bangladesh Poribesh Andolon (BAPA) called for immediate withdrawal of the government’s decision to allow risky factories to operate in the close range of the Sundarbans. They made the call at a press conference held at the Dhaka Reporters’ Unity (DRU) where the Convener of National Committee for Saving the Sundarbans (NCSS) Advocate Sultana Kamal presented the keynote.

The press conference was held on April 11, 2018, jointly organized by Waterkeepers Bangladesh, National Committee for Saving the Sundarbans (NCSS) and Bangladesh Poribesh Andolon (BAPA) and 57 member organizations. The press briefing was held under a banner – “Demand for the cancellation of 20 red category factories”. The speakers mentioned that such factories may cause deadly pollution to the Sundarbans.

In her address Advocate Sultana Kamal expressed her worries about the government’s inaction on protecting the Sundarbans. Earlier the government granted permission to set up 332 industrial plots around the largest mangrove forest in the world which is also home to the Royal Bengal Tigers. Even worse, Sultana Kamal mentioned that the government has allowed to set up 190 factories within the buffer zone of the forest, out of this 8 of them are with LPG and 24 factories which have been categorized as red which means they are highly polluting plants.