Human chain as a protest against the unplanned sand extraction from Khowai River. 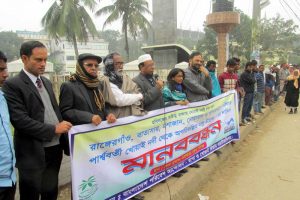