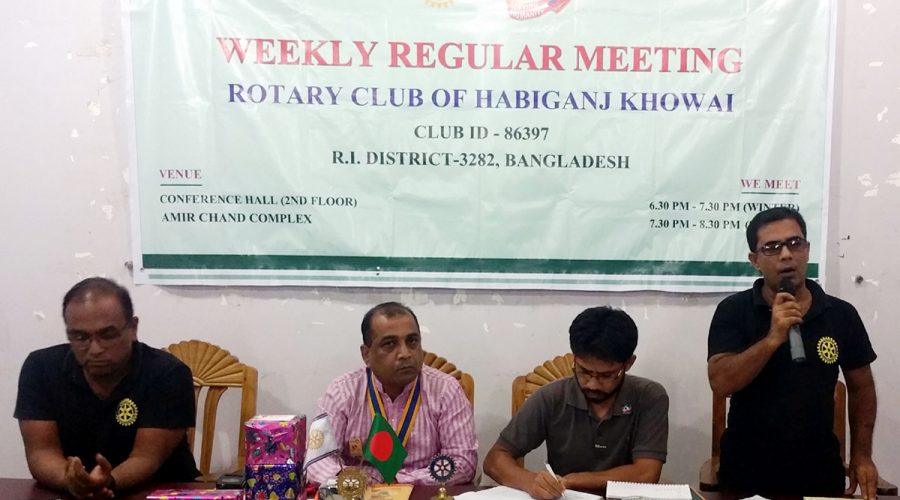 Rotary Club of Habiganj, Khowai has arranged a discussion meeting on “The Importance of Environment in Building Healthy Society”on 21 October 2016 in the conference hall of Amir Chan Complex presided over by Club President Mr. Shafiul Azam while Khowai River Waterkeeper Tofazzal Shohel delivered the keynote speech.

Khowai River Waterkeeper Tofazzal Shohel focused on rivers, canals, haors, forests and especially Khowai River and its pollution. He said that restriction of water by the Indian government, encroachment inside the country, illegal and unplanned sand extraction, land grabbing, pollution etc. have made the river lose its flow. Yet, a large part of the livelihood (agriculture, fisheries, business etc.) is dependent on this river. Besides the condition of old Khowai River flowing through the city is even more miserable. Encroachment and pollution are increasing at an accelerating rate. People are suffering from health hazards due to proliferation of harmful flies in dry season and untimely flood in the rainy season. Moreover, crisis of pure drinking water is also very acute in dry season due to depletion of ground water level.

Regarding the industrial pollution, he said that different unplanned industries are being constructed in three-season agricultural land of Habiganj sadar and Madhabpur upazilla for some years. Dumping from these industries is creating serious industrial pollution in the adjacent canals and rivers. For that reason, people are suffering from diseases like asthma, dermatitis etc. On the other hand, agricultural production is waning. Meanwhile, the prominent river of the district, Sutang has exceeded its pollution level and became blackish and malodorous. Fish are no longer found in the river. People are suffering from water crisis that used river water once.

Khowai River Waterkeeper has been working with the ponds, rivers, canals, forests etc. of Habiganj for quite a long time. But the inadequate vigilance of the respective authorities is a key reason for degradation of these natural resources.