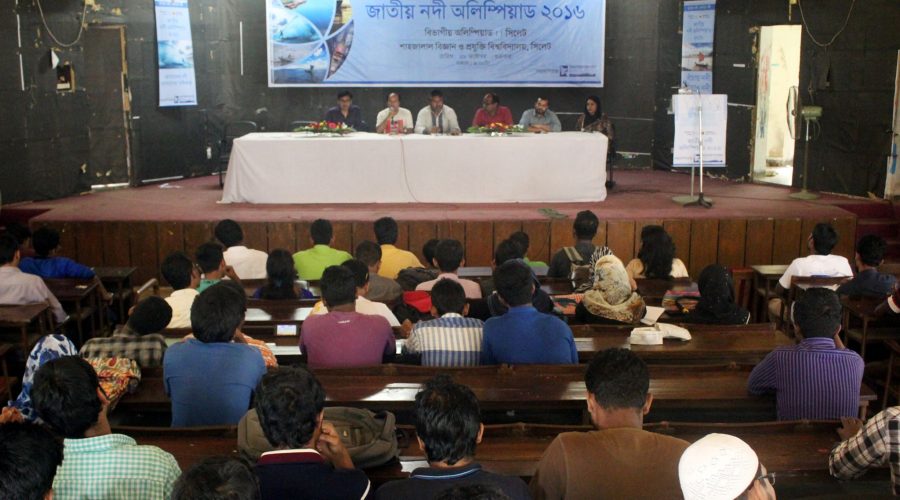 The participating students who came from different universities and colleges, of Sylhet divisional River Olympiad 2016, commenced at Shahjalal University of Science and Technology (SUST) campus on 28 October 2016, became highly enthusiastic to partner the river conservation; particularly, enthusiasm has been created regarding protection of Surma River among the participants.

Satyajeet Bhatyacharja, a student of Leading University was discussing with his friend about Surma River and telling, “We never thought like this about rivers. The world’s major human civilizations have been built on the river but we, human societies are forcing them to death. It will be difficult for Bangladesh to sustain without the rivers”. He also said,“Surma River is close to my University campus. It is being shrunk day by day, losing its navigability. I have learned a lot of things about river from today’s River Olympiad. I want to work for saving this important river of the country”.

Waterkeepers Bangladesh, Riverine People and Samakal Swurid Somabesh organized the Olympiad with the theme, “Know your river, revive it better”.

The Divisional River Olympiad was inaugurated by the Vice-Chancellor of SUST Prof. Dr. Aminul Haque Bhuiyan through freeing Balloons in front of the Shikkha Bhaban of the University. The main program started with the National Anthem held in a mini Auditorium.

After the formal opening, a quiz contest was taken at 10am -11am. Around 200 students of Honors and Masters from SUST, Sylhet Agricultural University, Leading University, Sylhet International University, North East University, MC College and Madon Mohon College participated in the Olympiad.

After the competition/ exam, there was a panel discussion where the students were open to ask any river related question to the panelists. Sharif Jamil, Buriganga Riverkeeper; Abdul Karim Kim, Surma River Waterkeeper and Sheikh Rokon, Secretary General of Riverine People were the designated panelists in that session.

As a chief guest of the discussion meeting and certificate giving ceremony after the panel discussion, the Vice-Chancellor of SUST said, “River is my love, river is in my reflection. We are happy to be a part of the first River Olympiad in Bangladesh”.  Appealing for a large-scale events in the future he said, “We should prevent river pollution. River and women are alike. Women enlighten us as mother, daughter and wife. We consider rivers as our mother for that, Bangladesh is called as riverine country. Student should proceed through this thinking”.

Vice-Chancellor of Leading University Prof. Dr. Kamruzzaman Chowdhury said, “We discuss a lot of things, but hardly talk about river pollution. Because of pollution, humans are suffering from various nutrition and health-related problems. If rivers are alive, we will live and thus Bangladesh”.

Member of National River Conservation Commission Ms. Sharmeen Murshid said, “I cannot give much information. But I think that today’s River Olympiad will enrich us”.

Coordinator of Waterkeepers Bangladesh Mr. Sharif Jamil Said in his speech, “We have been working for rivers for last 16 years. Enthusiastic participation of the students in the Olympiad is the best success of our long activism for the rivers of Bangladesh. We couldn’t join the liberation war in 1971, but as an environmental activist, we always carry the underlying essence of the independence of Bangladesh”. He explained them river related legal frameworks and hoped them to be pro-people and pro-environment at the professional life in future.

The Secretary General of Riverine People Mr. Sheikh Rokon said, “The questionnaire of the river Olympiad is self-explanatory about the reasons of our concerns over the rivers in Sylhet. River is life and livelihood.”

Assistant Editor of Samakal Mr. Sirajul Islam Abed said, “Protection of Rights to River is important. We should ensure our right. River is like our mother. We will protect our mother”.

The closing ceremony of the River Olympiad was presided over by Dr. Kamruzzaman Chowdhury, Vice-Chancellor of Leading University and Advisor of Samakal Swurid Somabesh, Sylhet and the chief guest of the program was Dr. Aminul Haque, Vice-Chancellor of SUST.