Observed the ‘International Day of Action for Rivers-2017’ 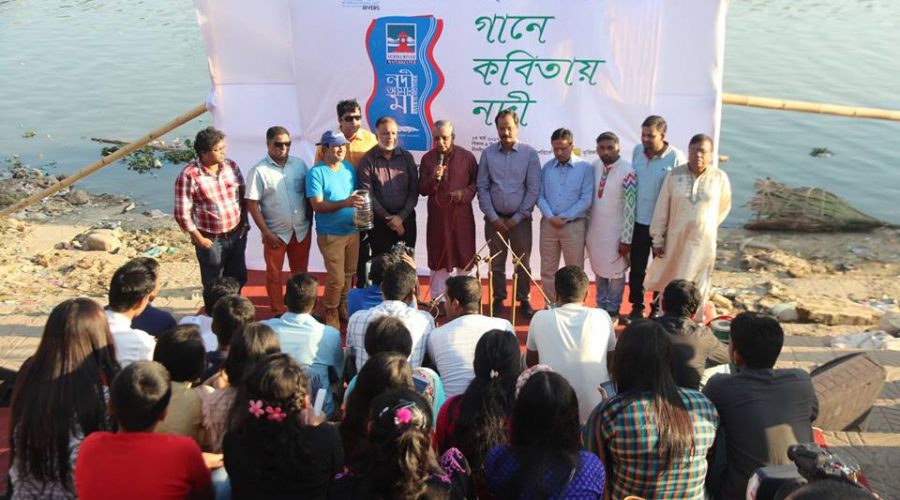 The ‘International Day of Action for Rivers’, held each year on the 14th of March, is organized by the different organizations around the word, and provides a focus for communities across the world to arrange events celebrating their rivers, and highlighting the threats they confront.

This year, like the many events to celebrate the 20th anniversary of the International Day of Action for Rivers across the world, Waterkeepers Bangladesh, Surma River Waterkeeper and Bangladesh Poribesh Andolon (BAPA) jointly organized a five day event from 14-18th of March to support the day. Multiple events occurred throughout the five days aim to protect the river Surma along with other rivers. On the other hand, public awareness and demands also showcased. By sharing the stories as one community, it aimed to gain visibility, power and hope.

The formal opening ceremony of the program held at 4am, on 14th March at the open stage of Chadnighat, Sylhet near the river Surma. The program titled ‘River is My Mother’, started by performing songs and poems on the river. 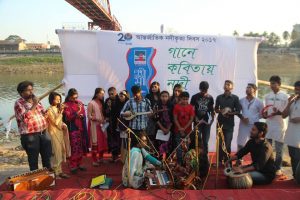 The inauguration part was carried out by the Sylhet  city corporation Mayor Ariful Haque. ‘I immediately rushed to the spot just after hearing the news of this program’, said mayor Ariful Haque. He also said that during his time, he started the eviction of illegal infrastructures, encroachment and rescue campaign to protect the rivers from pollution. He praised the environmentalist and media for their active participation and cooperation during his work. After his speech, a cultural group called Mittikai Mohakal performed their own poems and songs. Syed Saimum Anjum Ivan hosted the event and many people were present during the day-long program.

The International Day of Action for Rivers was originally adopted by the participants of the first International Meeting of People Affected by Dams, March 1997 in Curitiba, Brazil. Now a global event, the day is described by International Rivers as a focus to “raise our voices in unison against destructive water development projects, reclaim the health of our watersheds, and demand the equitable and sustainable management of our rivers. In 2008, BAPA, Sylhet Branch first time observed the International Day of Action for Rivers. For a decade BAPA along with other organization has been celebrating the day as part of the continuation of the program. This is the tenth time; Surma River Waterkeeper has observed the day. Mayor Ariful Haque announced the opening of the event by releasing 10 fishes in Surma river.

Surma River Waterkeeper, Abdul Karim started with the welcome speech at the opening ceremony. He said that hundreds of rivers flows through the northeast of Bangladesh in Sylhet division but unfortunately the existence of the river are now threatened. ‘India’s hydro-electric project Timaimukh Dam on the river Barak which is the upstream of major rivers Surma and Kushiara, still no clear announcement has made for the  cancellation. 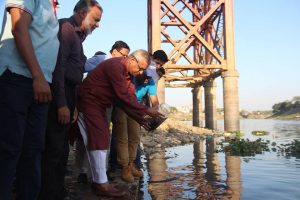 Barak and Kushiara River:
As part of the five-days program, on 14th March, at Alamsid, Jakiganj Upazila, Sylhet a long human chain held demanding the excavation of the source of Surma near the estuary of Barak and Kushiara. 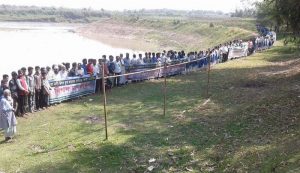 People from all walks of life gathered there at 12 noon to support the cause. Led by Abdul Karim Kim, Surma River Waterkeeper other who joined the event were Professor Mohammad Mehdi Hassan Khan, Head of the Department of Chemistry and Bio-Chemistry Sylhet Agricultural University, Badar Chowdhury , BAPA member, Bikash Chandra Majumdar, Head master of M.R. Didyaniketan School, Abdul Qadir al-Azad, Awami League leader, Jahed Ahmed, Noyabari Boys Club, social activist Mohammad Riaz Uddin and Mohammad Shahan Shah. It’s an irony that country’s longest river Surma’s source has been filled by the encroachers. As a result, eight months a year no water is found in the river. There are all together 35 chars could be found around the 32km  distance of the river. The agriculture is now facing the negative impacts due the lost of the navigability. Considering these negative impacts, it seems that the river Surma is dying. Abdul Karim Kim, Surma River Waterkeeper said, ‘ during winter the river goes dry and no water comes from the Barak river. Perhaps, some water might come from the Lova river which is insufficient. So, this is how the  35 chars have been created. It is high time that we should be concerned about its impact’. 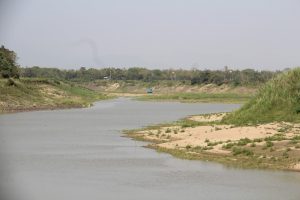 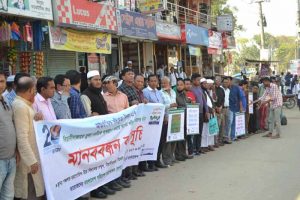 On March 15, environmental activists and villagers joined the human chain that was organized in Panchakanda jointly by Bangladesh Paribesh Andalon (BAPA), Surma River Waterkeeper and Waterkeeper Bangladesh to observe the International Day of Action for Rivers. They demanded to rescue the Lula river from land grabbers and immediate dredging to restore water flow in the river.The programme was conducted by Dr Tayef Ahmed and presided over by Bianibazar upazila Vice Chairman Shabbir Ahmed. Among others, Surma River Waterkeeper, Abdul Karim Kim and President of Bianibazar upazila unit of Sushashoner Jonno Nagorik Aman Uddin delivered speeches at the program.

Piyain River: On March 16, at 11 am another long human chain was organized demanding the save the canal connected to Surma river from land grabber and pollution. A part of the movement to support the International Day of Action for Rivers,  near the basin of Piyain , Jaflong a long human chain held demanding the to stop to the illegal stone cutting near the critical areas in order to save the workers’ life from accidental death while stone extraction. In addition, they demanded a judicial inquiry for the death of the 20 workers in those critical stone cutting zones.

The hillock is not leased to anyone but a group of unauthorized traders, backed by some influential locals, have already destroyed its around 137.50 acres to extract stone, said environmentalists and some district administration officials. To address the issue among others, Rashida Akhtar, BRAC University researchers, Protush Talukdar, Journalist, environmentalist Anis Mahmud, Momen Mia, bank officials, Golam Pavel Reza, Vice-President of Sylhet Prothom Alo, Shah Sikandar Shakir, General Secretary of Sylhet Prothom-Alo also spoke on the occasion.

As these selected examples show, the International Day of Action for Rivers gives communities around rivers across the world the forum to organize a wide variety of events, and to give their local environments a global focus. Rivers are self-evidently an inspiration and concern for diverse communities across the world, and next week’s events will help highlight their importance and threats.

The news of those events were published in some of the national dailies. Please find important links below: